This past week I experienced a bit of an embarrassing learning experience while golfing with fellow golf blogger John Duval of IntoTheGrain.com.   We were playing at Soldier Hollow Golf Course here in Heber, Utah, which had been getting pounded by rain and even hail.  The bunkers (known by some as sand traps) had been compacted and not maintenanced.  So that meant the sand in them was extremely hard and even had a bit of a crusty layer on the top.

On one of the six, yes six, par-3’s on the Silver Course, I had trouble getting out.  I kept blading shots and line-driving them into the lip.  Luckily for John the lip stopped one of them, or my ball might have killed him, or at least caused severe eye damage.  Inside joke there.  Like the extremely intelligent golfer I am, I kept trying the same shot and getting the same result, blading shots into the lip.  After a few of them I picked the damn ball up with my hand and threw it at the hole.  That was the shot of the day.

A couple of holes later on yet another par-3 I was again in a greenside bunker.  This time a bunker quite short of the green, about 20 yards.  Instead of sand wedge I chose lob wedge.  I got out of the first bunker no problem, but went into the 2nd one.  Lob wedge again from the 2nd one was no problem onto the green.

The Reader’s Digest version of the lesson was that out of crusty, hard, compacted sand my lob wedge was a better choice than my sand wedge.  Why?  The design between those two clubs in my particular bag is quite different.

My sand wedge, and the majority of most sand wedges has a lot of bounce.  The bounce comes from the sole of the club, or the bottom line which is what touches the ground when a golfer is holding the club in position before a shot.  This area of the club head can be flat, rounded, v-shaped, or custom ground into all sorts of shapes.  The shape of bottom of the club produces a certain amount of bounce.  Most common in sand wedges is about 10-12 degrees, quite a bit of bounce.

Why a lot of bounce?  In regular sand which isn’t hard like the sand I described above, a club will go into the sand and dig or burrow in.  This can stop the club or severely slow it down.  A club which is decelerating in sand will not produce a good shot.  This is why most amateur golfers hit fat shots in the sand, and the ball only goes a foot or two, leaving them another sand shot.  The bounce of the sand wedge helps the club deflect off the sand and prevents it from digging in.  This way the club travels through quickly and gets the ball in the air and out of the bunker.

Bounce and hard sand? So if the sand is extremely compacted and hard, the design of the sand wedge will make the club bounce far too much. The club will not go under the sand. Instead it will bounce up and the leading edge of the club, or blade, will hit the ball.  This is called “blading a shot” and is what produces the line-drive shots I was hitting into the lip.

Lesson one is that clubs with a lot of bounce are generally not a good idea in hard sand or on very hard ground.

My current lob wedge has quite a different design or “grind” on the sole of the club compared to my sand wedge.  Rather than 10 degrees of bounce, it has only four.  This is not a lot of bounce at all.  When I switched to the lob wedge in the 2nd trap, the club did not bounce in the sand.  It went under the ball without going back up too soon from impacting the sand.  Therefore I did not blade the shots.  The first shot didn’t travel far enough because of the loft of the club and how hard I swung it, but the ball got out of the crusty sand with no problem at all.

Conversely a lob wedge or club like mine with a small amount of bounce may not be a great club selection for an average golfer who is hitting out of soft sand.  The club will not bounce off the sand but will dig in, producing a fat shot which will come up short.

Lesson two is that clubs with very little bounce are a good idea for compacted sand or very hard ground. 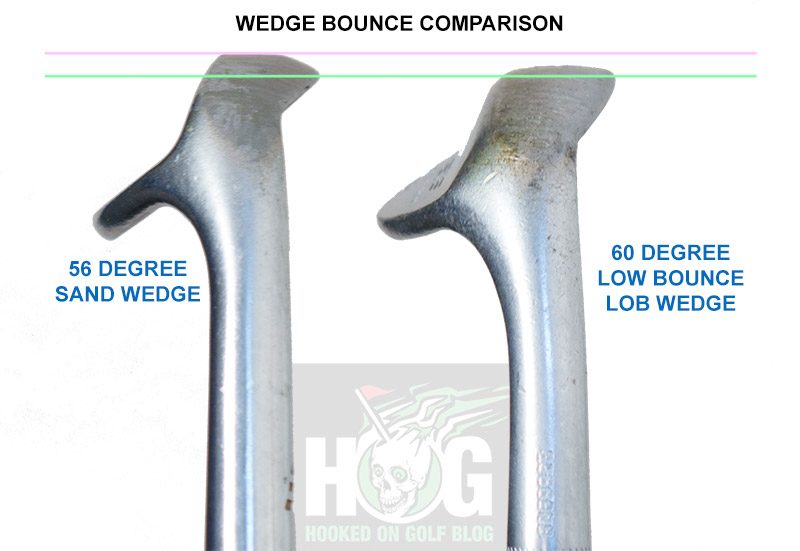 Look at the image above. Left is my sand wedge and right is my lob wedge.  The green line shows the leading edge of the face.  The pink line shows the bounce.  You can see that the sand has much more mass and the angle of the sole (between the pink and green lines) is much higher. That’s the bounce!

Lesson three from this experience which I learned, probably re-learned, is to not be too lazy to go get the right club.  Once I hit that first bouncy bladed sand shot into the lip I knew the ground was too hard and the sand wedge was the wrong club.  I should have gone to my bag and gotten my lob wedge before taking another swing.  Instead I was too lazy to go get another club.  The result was a big number and loss of hole.

If it were a tournament or important situation other than a casual round, I would have changed clubs.

Next time you find yourself in a bunker, look at the sand and get a feel for it with your feet.  Is it hard?  Is it soft?  Now you may have a better idea which of your clubs is the best choice.  If by chance you choose the wrong club, don’t hesitate to take a few more seconds to grab the correct club and save some strokes.

Villa del Palmar Beach Resort and Spa at the Islands of Loreto, Mexico